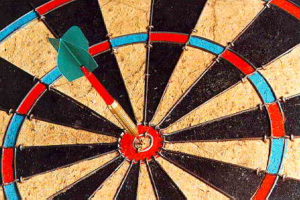 More than one hundred years ago, the famous American inventor, Thomas Alva Edison, often said in his public speeches that the first prerequisite of success was the ability to concentrate on a single problem.  And that’s exactly what he did.  In fact, everything he worked on he took notes, and it was in those notes and his attention to detail his ability to focus came through.

As an example, when he began working on developing the electric light-bulb, his notes showed that he attempted to get the invention going at least 10,000 times before he achieved success.  That is more than TEN THOUSAND ATTEMPTS without giving up.  My mind simply can’t comprehend that level of focus and dedication.  But it did happen, and we are all the better because of it.

He also believed in the power of the subconscious mind and believed it could be programmed to help him focus on whatever he wanted to achieve.  In fact, he wrote this in a journal.  “If you get up at seven and go to bed at eleven, you have put in sixteen good hours, and it is certain with most men that they have been doing something all of the time,” Edison then wrote. “The only trouble is they do it about a great many things and I do it about one.”

What he really wanted us to here was to decide what are your highest priority activities are and set aside blocks of time to give that activity a “concentration of power.” Then take the single most important project you need to accomplish, like your month’s selling quota, and then go to work on it and stay with it until you have accomplished it to the most minor detail of what you have set out to do.

Thomas Edison registered and owned over 1,000 patents and to this day is regarded as one of the most influential people during the past 1,000 years.  So why not take a lesson from this man and not allow the hundreds of daily distractions keep us from accomplishing our goals.  Just do things one at a time.

Another way of getting things done is to follow the way Dr Norman Vincent Peale set his mind to a task – any task.  All day he would take out a note book and write down his thoughts.  Then what he would do is to empty his suit pockets by a rubbish bin just before he went to bed each night, and he would read each note out aloud and work out which one of these he would prioritise to allow his subconscious mind to concentrate on over night.  Invariably he would wake up the next day, and most days, he would have an answer to the problem or issue he went to bed with.

Just a small Step a Day – Every Day

There are times that sticking with an important project all the way to the very end can quite often prove to be quite a difficult task. We’ve all been there at one time or another.

Often times we find it very easy to decide on some important activity, like learning a new closing style and road -testing it every week, only to have a really tough time getting started or staying with it within the time-frame you set yourself.

One way to get on top of that challenge is to ensure you start with a simple action every day. And it could be as simple as making that one extra call, sending a congratulatory note or e-mail, or inviting a special prospect or customer to lunch.

The important thing here is…if you want to be a great salesperson, you need to keep at least a hand in what you need to accomplish every day.  Simple or pro-active things that constantly keep you connected to high income producing activities…and you’ll need to do that each and every single day.