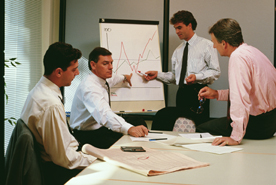 What’s that old saying that we’ve grown up on as salespeople and heard so often it’s next to nauseating?  Yes that’s the one, “Telling is not selling,” and it’s not only true, it is engrained into the mind of every professional salesperson I know.  And the supersellers I am in contact with almost wear it as a symbol of professional pride.

Professional salespeople, in the main, are aware that they only really selling when they are asking questions and giving the prospect the opportunity to tell the seller what they’re looking for, what they want, sometimes they may even know what they need, and when they do, they will tell you that too, and they will also tell you what they’re concerned about, what their right now challenges are, and so on.

Salespeople are only really selling when they are listening attentively, thoughtfully and courteously.  They are selling when they are aware that the more questions are asked, and considerately listen to, the more likely the prospect will say, “This is exactly what I’m looking for.”  To them this the key point, and it’s what will bring them to a point where they find themselves in a buying mode. Moreover, there is a key point that will influence them to look more closely at every product or service of interest to them when they feel like this, that will get them to seriously consider owning whatever it is that has engrossed them this way.

It’s the same mental state that as a prospect that will look for must receive assurance that they are making the right decision. And until the prospect hears or sees that key point of influence, the prospect is most unlikely to make any buying decision.

When presenting to two people, most salespeople quickly establish which is the dominant decision maker and concentrate on them.  What they overlook the majority of the time, is that the non-dominant decision maker still has veto-power.  Never avoid or ignore them, the price of an oversight such as this is far too high.

And if Doom and Gloom is Taking Over

These are not the easiest days for people in the selling profession. If doom and gloom has become the norm in your work circle and it’s turning into one huge pity party, look elsewhere for inspiration, and when you find it, treasure it.  Now that doesn’t necessarily mean you look elsewhere for work.  All it means is you temporarily look further afield for inspiration so that you can keep selling and improving in your sales.

Above all it’s about Business Respect

The more you care for and/or respect your prospect, the better job you end up doing for them.  Don’t believe me?  Then the next time you present to a high-profile personality be it in business, the arts, sports or social scene, just monitor the level of care you extend.  The fact is, if you put the same effort into every call you make, your sales (as well as your income) will soar.  Don’t ever forget that one point.