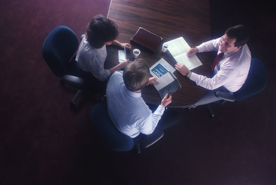 To the man who has carved out a career in one of the professions be it in Law or Accounting, or in Medicine or Dental Surgery, or the Arts or Sciences, selling appears to be a contradiction assuming enormous proportions.  A contradiction based on experi­ence.  Each sales professional needs to learn the “Art of Salesmanship” in order to be able to survive and grow in their vocation.  Yet what these professionals read about selling, generally contradicts what they see and experience salespeople doing in their day to day lives.

What makes it even more bewildering’, is that their professions require both an enormous amount of learning and continual updating.  And, not one of them would expect one of their associates try and achieve results:

THE PROBLEM WITH SALES IN THE 2000’s IS … WE’VE BEEN TURNING OUT SALES-WISE REPRESENTATIVES.  The ones Industrial Psychologists call “Comfort Zone Sellers”.  People who are always going after new and innovative selling techniques before they’ve mastered the true and tried methods that have always worked.

They want instant fixes in place of sound training.  They experiment, rather than apply that which is know to give results.  Their language contains phrases such as “Trust me”, “She’ll be right mate”, “This is best for you” and a host of other easy to learn one-liners.  To achieve results, their presentation has been rewritten to include phrases that exaggerate, overstate and manipulate.  And rather than advise, they impress.  In time they harden their attitude towards their prospects, their peers and their companies.

Use a Summary as a Part of Your Close

When you finish giving your presentation, it’s important to summarize the benefits of what you’ve agreed to with your prospects … especially the points that have addressed your prospect’s specific wants.

“A little earlier you told me that what was important to you was __________. Good, so let me summarize what we’ve agreed on here. If you agree to move forward, here are the benefits you’ll be getting. As I see it, your most important benefit will be…”

Use “We” When Negotiating

Professionals never refer to their superiors or the company as they.  That distances them from being able to negotiate on behalf of their company.  They simply use WE.  And that automatically elevates their position in the eyes of the prospect and greatly strengthens their negotiatory ability.