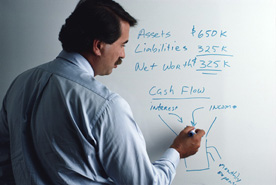 It doesn’t matter to them whether they’re working on a new client or just visiting an existing one, prior to the call, top professionals will do some basic homework.

Here are a few areas they’ll probably work on:

With proper research the top professional may just be luck enough to unearth some real selling treasure.  It could be that their contact, Joan Smith that writes on Yellow Roses.  You’ll never know until you read up.  Your initial investment here may be a few minutes to a half an hour, and if it helps bring you closer to getting a sale, then it’s worth it.

The top professionals I know thrive on working this way, because they know research brings them results and saves them time in the long run.  It’s unfortunate other levels within the selling field don’t think that way.

Professionals Put Themselves in their Prospects Position

Top professionals take the time to do some homework, the extent of which will vary on the value of the call they are about to make  But they won’t make the mistake of coming in “empty handed” in the fear they will not be able to customize their opening contact lines and related questions.

Ask different questions. Start by asking questions that don’t include “Ahs” and “Ums.” It’s something that’s almost impossible to do when your questions aren’t prepared prior to the sales call.  A clear indication what you’re asking isn’t a very good question, is when you ask a question and the prospect or customer responds “What do you mean?”  The whole concept of asking fabulous open-ended questions is what good selling is all about.  The better the question, the better the response will be.