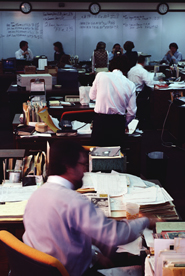 Every minute of every day, someone does something that either costs them an order or may even undermine what may have taken months or even years to establish.  It could be an order not delivered on time; promises made but not kept; an arrangement made verbally at first, then not confirmed in writing – resulting in anything from a misunderstanding to possible legal litigation.

On the other hand, you travel a long distance to a meeting only to find someone has given you the wrong sample, or even put the wrong document in your bag. Perhaps you make a living from commercial sales and can’t work out why your results have slumped, until someone points out that you’re been presenting with dirty or bettered or out of date samples.

Even the Very Best can Stumble due to Minor Oversites

I have known John Auciello for more than 30 years and find him meticulous in everything he does.  He’s the man who single handedly built one of Australia’s largest direct sales empires that around a decade ago had more than 70,000 clients on their books.  Around a half of these were the direct result of working referrals effectively.

The division I ran for him grew to in excess of 5,000 clients in less than 10 years, at the time we were looking to expand into Western Australia and John had sourced a potential distributor in Perth.

For those that are unaware of the size of Australia, Sydney to Perth is a flight of around 5,000 klms and is a trip from east coast across to the west coast.

John arrived at around lunch time and caught a cab to his prospects office.  When it came time to put the machinery through its paces, john flicked the on switch, the light went on, but nothing worked.  The presentation was aborted and a replacement machine was air freighted on the first available flight.

The next day everything worked perfectly, but by then, the prospective distributor had gone cold on the idea of working with John’s product.  It turned out that John had accidentally picked up the wrong machine because of where the storeman had left it.

The sale had gone cold.  Yet this disaster had a happy ending, from that point onward, John insisted that everyone carry a spare machine no matter where they travelled.  One mistake for John was one mistake too many.

An airline pilot meticulously works through a check list before each and every flight undertaken, no matter how many times he has flown that plane before, and no matter how many hours he has flow that route, one indiscretion by the pilot could mean his own life and the lives of each of the passengers he is responsible for.  So why be so meticulous about detail.

Are pilots the one group of people seemingly obsessed by an overwhelming degree of attention to detail?  The answer is a resounding No.  The professional pilot can’t afford to take chances, and the same applies to every professional in every other field of endeavour.  What would happen if the engineer didn’t give due consideration to the plane he was responsible for?

You say, what the heck, people make mistakes, it’s not that critical.  So what them would you say if the pilot was the one flying your plane; or the architect the one designing and building your dream home on the side of a cliff; the stunt driver was the one performing at a live show to which you were given front row seats to, and the taxation accountant was yours, and you had the Tax Department insisting on a revision of your last return by next week.  Now that puts a different perspective on the situation, doesn’t it?  But the truth of the matter is, a professional in any field, pays that same high level to detail on even on the simplest of tasks, or what seems to be the most mediocre of situations.  They do that because they are professionals.  And if that it sounds complicated, its not.  The one thing they all have in common is a check-list.

Top Professionals Rely on Check-Lists to Help them Sell

Professional salespeople also have a check-list and rely on it for most things they do.  I speak in public on a regular basis and many a time have to work in venues I had never been to before, some with the most spartan facilities or the most mediocre equipment.  Each is a challenge, and if I didn’t have a check-list for each time I delivered a key-note or seminar in a new location, and if I didn’t take the trouble to rehearse some of the crucial delivery points at that location I know I would have to accept whatever outcome presented itself.  But because of the effort I put in before-hand I know I have a good degree of control over the outcome.

A check-list is one of the simplest methods known that helps you pin-point on every level that needs attention to detail imaginable –  from the most complex, to the simplest.

Then if it’s so important, why don’t more people use it?  Some don’t know about the value of a check-list simply because they had never heard about it or had never been told about it.

Even in areas where it’s most crucial, including supervisory and managerial roles, it tends to be overlooked or not even considered as a vital tool that cuts work time and helps increase productivity levels.

I believe that many that should use a check-list for the same reasons more people don’t pray at the beginning of each day, or plan each days work the night before, or even start out each day looking for new opportunities.

To them it’s a form of accountability and appears too hard, or too much work, or requires too much disciple, or they simply can’t be bothered with it.  Yet, those that plan their work the night before swear by how much time they save the day after, how much more productive they and how much more they accomplish.

Whatever the excuse, any excuse, in fact, all excuses come at a price.  What price are you prepared to pay when you substitute an excuse for your lack of your attention to detail?

What if what you don’t accomplish what you are able to because of a simple check-list, and because of that, you may be out of pocket literally thousands of dollars each month?  Money you could have earned had you made yourself more accountable by using a check-list?   Remember, professionals don’t need an excuse to get things

Take a Course in the Field you Want to Major in

We should all aspire to attend the audio “seminars” spoken and scripted by the proclaimed experts in their field on audio tape.  While so many professionals take additional those courses and learn everything they possibly can and learn from the experts are at an advantage to those that don’t.  These are the same people that should ask the experts questions, write them letters, read their books, read their articles and listen to people with proven track records in the area in which you want to be successful.  Do you want to a part of that as well?  I hope so.

his Article is by Peter Collins – In a sales career spanning more than 50 years, Peter Collins has focused on helping and bringing out the best in others – whether it involves training or mentoring salespeople, managers, business consulting to SME’s. Since the 1970’s Peter has built a reputation as a Nationally and Internationally Published author, and has 65 books to his credit, but he is mainly known for one book based on the Audio Tape series of the same name, Over 50 Ways of Closing the Sale. In his personal life, Peter has been sought after as an encourager and motivator that has given of his time and talents freely despite his busy schedule. Subsequently, he has assisted churches, pastors, community and charity groups, as well as individuals through his teaching, training, development and on-going mentoring.
Peter can be contacted through his website – profitmakersales.com