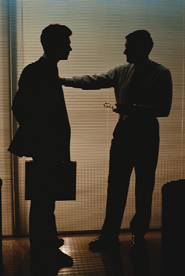 No matter how small the favour one of your prospects presents you with, there will always be an opportunity for you, the seller, to repay that favour.  And so often, one or two of your clients will pass on a referral to you, that is something you should make a big deal of.  Why?  Because referrals will always be one of the easiest ways to make a sale – but that too won’t happen unless you work at it from the very beginning.

Also remember, that whenever you are given a referral, it increase your chances that they will give you more referrals, sometimes to show your appreciation for the work you’ve done.  Obviously a small gift, or a thank you note or even a simple phone call would be the least that should be done.

Another thing you should do is to call your referral source and update them about the progress of the referrals and the work you have done – even if the referrals were not good prospects or of value to you.  By staying in touch, you enhance the relationship with these customers simply because they make your job much easier.

One of the nicest ways to attract pleasant prospects to you as a salesperson is to ensure you go out of your way to pay them compliments – sincere compliments.

Sincere compliments, more often than not, are always designed to create a comfortable dialogue exchange between the prospect and the seller. Then the more the prospect talks to easier it will be for the salesperson to size them up and work on an appropriate response. But, again, I will stress he point here that the compliments must be absolutely sincere or whatever you do could backfire – and backfire big time.  Here is a formula for sincere compliments that will work in your favour:

Quite often, the conversation will build to a crescendo that gives the seller an opportunity to find out if these are the type of prospects the seller is looking for.

One of the biggest compliments a salesperson can receive is when a prospects says to you, “That’s a good question.” But if you’re not hearing that compliment often enough, it means you may not be asking really good questions as often as you should.  The best way to overcome that issue is to prepare, rehearse and refine your questions before they are used in a presentation.

I was taught many years ago a question an answer arsenal was crucial.  When I first heard of this process, I was told, “You need to have answer 27a to question 49b before your sales begin to soar.”  In then researched, rehearsed and reviewed my “sales arsenal” over the next few months, and the more my “sales arsenal” grew, the better I closed.  Within 3 months I was consistently closing around 90% of my first call sales.

I worked with a wonderful salesman, Kevin Booker, who was at the top of his game in therapy sales for over 5 years, and he would memorise his presentations and responses (in a similar manner to the one mentioned above) and he constantly told everyone that had worked with him, he would be presenting or answering questions, but because they were all memorised and were verbalised in a rote fashion, he was able to observe body language and in many cases anticipate what the next answer would be to their next question.  He also told me that many times, when he was “on his game,” he would give them an answer to what he believed they were thinking by simply capturing the essence of their thoughts (as he saw in their body gestures) in a third party story he would tell them, and so often they would respond with, “You know, I was just thinking about that.”

Everyone I know that is on top of their presentations and responses through on-going rehearsal has an extremely high closing rate.  The issue with most salespeople is that they are not prepared to put in the effort, at times, an extreme effort to be on top of their game.  What about you?