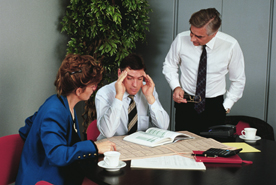 Professionals always analyse their results.  To them self analysis is the major key to their success, allowing them to develop and grow toward achieving the next stage of their goal.

Every call needs to be analysed.  In the majority of cases, so does every statement, prospect reaction and counter statement.  This should be done whether the call is successful or unsuccessful.  In fact, many true achievers would tell you they spend more time analysing successful calls than they ever do with the unsuccessful calls – that way they capitalise on their strengths rather than their weaknesses.

It has been said often that one should build from his or her successes and learn from failures.   It follows, if you disproportionately dwell on failure over success – then expect to fail more times than you succeed.

In computer language its called GIGO. Garbage In, Garbage Out.  On the other hand, if you use GIGO to our advantage – GIGO = Good In, Good Put – and that simply is putting good in to get good out, and when you do that, your success will breed more successes.

Self analysis is the barometer a professional uses to ensure they remain professional in every phrase needed in selling.  Without analysis, there is nothing to compare success and failure to – or the unwanted mediocre time in your life.   We all need to analyse, even if we analyse nothing more than what we earned last year and how we went about earning it.  Its still a comparative analysis.  If your income is down – you should do something about it.  If its up – perhaps congratulations should be in order – but still analyse so that you can work on improving it.

The Webster’s dictionary defines ‘courage’ as “The attitude of facing and dealing with anything recognised as dangerous, difficult or painful, and instead of withdrawing from it; the courage to do what one thinks is right.”  Yet so many fail when it comes to applying courage.

One needs courage when fear strikes before, during and after a sales call.  Then one needs courage to overcome call reluctance.  Without courage, the fear of rejection could grow into a mountain so high no-one except those with courage would attempt to even climb it, and even more courage to conquer it.  And then it takes real courage to keep on working at being successful week after week, month after month and year after year knowing that there will be insurmountable obstacles to overcome, problems which were not prepared for or their bad luck dished out to you in droves.

But that’s what professionals expect they don’t plan for disasters, but when they happen they pluck up the necessary courage to overcome them.  Yet to the non-professional, he or she may feel that they need an extraordinary amount of courage to ask for the order at every sales presentation.  If this is the case, try this one handy hint.  Closing the sale shouldn’t require courage.  It should require study, rehearsal, and knowing when and how to ask for the order.

You Need to Choose to Be Positive

The human brain cannot have both negative and positive thoughts at the one time.  Whenever you try and rationalise the two together, the negative will invariably mostly win.  You need to make a conscious choice to stay positive in every situation.  Little wonder why the true professional is considered a super-closer.  He or she thoroughly deserve to be – they work hard enough to achieve that status

The professional salesperson knows only too well to never “pitch” a prospect but to “present” a potential customer.  Accept the difference, try it for yourself, then notice how much better your call is accepted.  And the sale does not end with our ability to get the order, it begins there.  Those that do not follow up after the order, lose out in two ways.  On-going repeat business and on-going referrals.