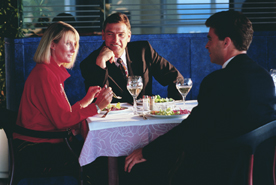 Here is the good news.  Everybody you meet, and anybody you are likely to meet in the future has bought and will buy again.  They will buy a variety of new products and services from someone, and they will buy them at some time not so far from now.

The bad news with this is that if they didn’t buy those goods or services from you, they will buy them from someone else.  Therefore, you must find the way to be around for those buyers when they are ready to part with the cash.  At that time, the seller must also be ready to overcome any of the natural, or  physical or psychological obstacles to them wanting to buy, and then be mentally and physically ready to be more than capable of selling to almost any qualified prospect you speak to.

In the USA it has been estimated that around 84% of sales are made through some form of word-of-mouth promotional activity.  When this happens the salesperson had better be of the understanding that that sales activity had taken place between prospects contacted by a salesperson and many of the existing customers previously sold by the salesperson or someone at the company they work for.  Moreover, others would come as a result of recommendations between friends, or colleagues, or family members in the form of advice and suggestions of what to buy, or not buy, and who to buy from.

Throughout the prior 300 plus pages there have been numerous references to the value of the referral to the salesperson.  Then when that same salesperson reads an article as explicit as this one, then perhaps the value of a referral may sink in.

Still not happy, then lets move it back to a quarter, that’s the same amount you already sold.  Therefore, now calculate whether that loss of sales amounted to $100,000 or $200,000 or $300,000?  And that has to be a bare minimum – because all you have done is simply doubled your previous self generated business you wrote anyway.

Makes you think why you don’t ask for referrals more often – right?

Now allow me to really make you think about what you are really missing out on by not working your referrals as well as you should be.

How would you like to get an overnight pay rise and a new selling status level without too much more additional work?  And what if you just worked easier to sell to prospects?  And what if more of your referrals contacted you to buy from you?  And what if you had your appointments made for you by existing customers who recommended that they better buy from you or miss out?

Have I now got your attention?  Do you want an overnight pay rise and a new selling status level where you work now?

Then consider this.  The only way that you can work your way up to be amongst the top ten percent of salespeople in your industry is by working your referrals and getting your existing clients to recommend you day in and day out.  But that won’t happen until your existing customers are so pleased with you they will be more than happy to open doors to new customers for you wherever you go.

And would you believe that there are some supersellers I know that go for long periods of time without having to take on any new company leads and do not need to hire a canvasser to do their lead-generating for them.  How would that be if you could do the same?

Then start to work referrals.  Over time, when your sales become consistent with your referral gathering and written goals outlook, and your sales career lines up with your focus, your sales results will sky-rocket, as will your income.